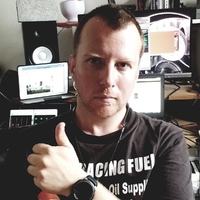 Biography
Daniel Lindholm was born in Sweden and attended music-school and Vasterhojd Music-college at the esthetic program. Honing his skill in composition and session-work around different institutions in Sweden, he later moved to Japan in the beginning of 2005. He started to write music professionally for the Japanese/International AAA-market in 2007, and has since been frequently used by companies like SEGA, BANDAI NAMCO, and CAPCOM. With a variety of styles he is no stranger of World Music. From Ethnic to Orchestral, Metal to Techno and everything in between, he's a well-rounded composer with a passion for film-scores.
Presentations
Computer Animation Festival - Panel & Production Talks
Creating an Animation in 64kB: A Dive Into The Making of Immersion