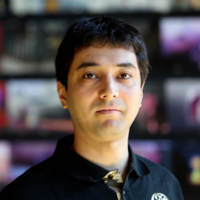 Biography
RYUSUKE VILLEMIN began his career at BUF Compagnie in 2001, where he co-developed BUF’s in- house raytracing renderer. He later moved to Japan at Square-Enix as a rendering lead to develop a full package of physically based shaders and lights for mental ray. After working freelance for Japanese studios like OLM Digital and Polygon Pictures, he joined Pixar in 2011 as a TD. He currently works in the Research Rendering department.
Presentations
Course
Art and Technology at Pixar