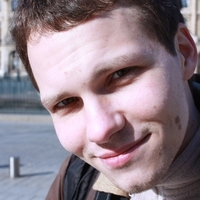 Biography
Julien Guertault has been working as a programmer since 2004 in domains like flight training, video games and virtual reality. He currently works at Square Enix Co., Ltd. as a graphics engineer. French born, he studied and graduated in Paris and South Brittany, and worked in France until moving to Tokyo in 2011. He is active in the digital art culture known as the demoscene, as part of the group Ctrl-Alt-Test, where he focuses on rendering, size coding and procedural generation. He has also helped co-organize the annual demoscene event Tokyo Demo Fest.
Presentations
Birds of a Feather
People in the Demoscene Subculture

Computer Animation Festival - Panel & Production Talks
Creating an Animation in 64kB: A Dive Into The Making of Immersion