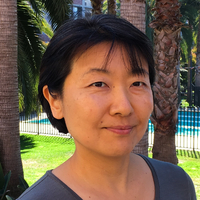 Biography
SONOKO KONISHI joined Pixar in 1994 as a Jr. TD after graduating from a fine arts college in the States. She worked on Toy Story, Toy Story 2 and Toy Story 3 in various departments such as lighting, modeling and character rigging. Over the past 20 years Sonoko has predominantly focused on feature film production but she has also worked on the production of shorts, TV Specials and promotional materials. She currently works for the simulation & digital tailoring department.
Presentations
Course
Art and Technology at Pixar