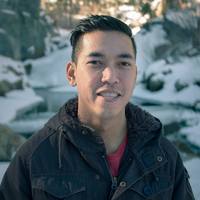 Biography
Neth Nom is a supervising animator and director with a decade of industry experience. He has contributed as an animator on numerous films, including Toy Story 3, Brave, Monsters University and Bolt, at studios such as Pixar, Sony Imageworks, Rhythm & Hues and Disney Animation Studios. He currently works at Google Spotlight Stories/Chromosphere as the supervising animator on John Kahrs' Age of Sail, and at Academy of Art University as an animation instructor.
Presentations
Computer Animation Festival
Sonder