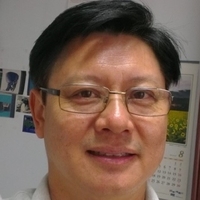 Biography
Ming Ouhyoung received BS and MS degree in electrical engineering from National Taiwan University, Taipei, in 1981 and 1985, respectively. He received Ph.D degree in computer science from the University of North Carolina at Chapel Hill in Jan. 1990. Since August 1991, he has been an associate professor in the department of Computer Science and Information Engineering, National Taiwan University. Then since August 1995, he became a professor, and was the Chairman of the Dept. of CSIE from August 2000 to July 2002. He has published over 100 technical papers on computer graphics, virtual reality, and multimedia systems.
Presentations
Poster
Free-viewpoint Synthesis over Panoramic Images (Topic: Virtual Reality)