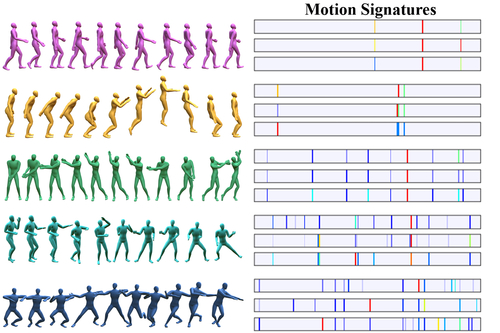 LocationHall D5 (5F, D Block)
DescriptionMany analysis tasks for human motion rely on high-level similarity between sequences of motions, that are not an exact matches in joint angles, timing, or ordering of actions. Even the same movements performed by the same person can vary in duration and speed. Similar motions are characterized by similar sets of actions that appear frequently. In this paper we introduce motion motifs and motion signatures that are a succinct but descriptive representation of motion sequences. We first break the motion sequences to short-term movements called motion words, and then cluster the words in a high-dimensional feature space to find motifs. Hence, motifs are words that are both common and descriptive, and their distribution represents the motion sequence. To define a signature, we choose a finite set of motion-motifs, creating a bag-of-motifs representation for the sequence.
Motion signatures are agnostic to movement order, speed or duration variations, and can distinguish fine-grained differences between motions of the same class. To cluster words and find motifs, the challenge is to define an effective feature space, where the distances among motion words are semantically meaningful, and where variations in speed and duration are handled. To this end, we use a deep neural network to embed the motion words into feature space using a triplet loss function. We illustrate examples of characterizing motion sequences by motifs, and for the use of motion signatures in a number of applications.
Authors 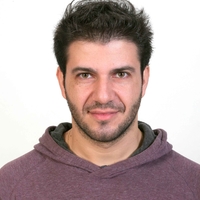