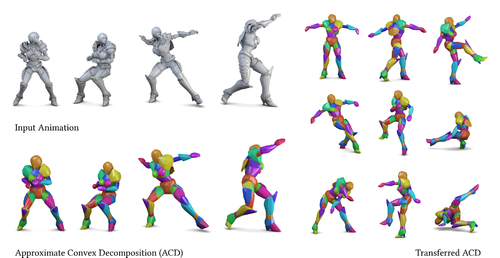 LocationHall B5(1) (5F, B Block)
DescriptionMany geometric quantities can be computed efficiently for convex meshes. For general meshes, methods for approximate convex decomposition have been developed that decompose a static, non-convex object into a small set of approximately convex parts. The convex hulls of those parts can then be used as a piecewise convex approximation to the original mesh.

While previous work was only concerned with static meshes, we present a method for decomposing animated 3D meshes into temporally coherent approximately convex parts. Given a mesh and several training frames---that is, different spatial configurations of its vertices---we precompute an approximate convex decomposition that is independent of any specific frame. Such a decomposition can be transferred in real-time to novel, unseen frames. We apply our method to a variety of pre-animated meshes as well as a 3D character interactively controlled by a user's body pose. We further demonstrate that our method enables real-time physics simulations to interact with animated meshes.
Authors
Daniel Thul
ETH Zurich
Lubor Ladicky
ETH Zurich
Apagom AG
SoHyeon Jeong
Apagom AG
Marc Pollefeys
ETH Zurich
Microsoft